Panguaneta is still among the 1,000 top companies in the Italian economy, which have overcome the Covid crisis and are planning their relaunch.

For the fourth consecutive year, the company has been mentioned among the Champion companies resulting from the research carried out by ItalyPost Study Centre in cooperation with "L’Economia", the financial weekly publication of Corriere della Sera. 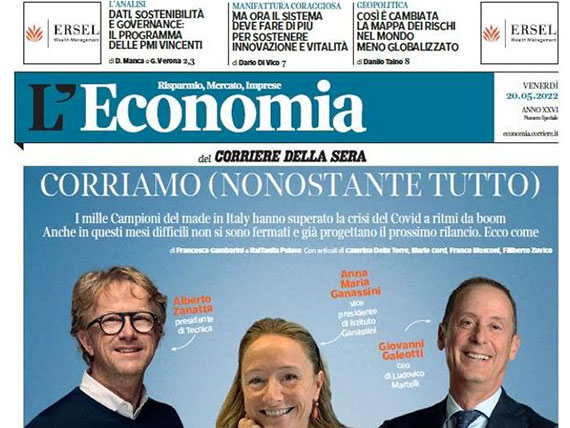 The research has identified 800 companies situated in the national territory with a turnover ranging between € 20 and € 120 million, as well as 200 top companies with a turnover between € 120 and € 500 million, which were selected based on the careful analysis of the available financial statements of the last six years. (2014-2020 period) and a series of strict corporate and economic criteria (such as Cagr, EBITDA, Rating and NFP).

A confirmation that strengthens Panguaneta's path and its commitment to being a 360-degrees sustainable company for the environment, people and the territory, which has become a strategic asset for company growth. A success made possible thanks to our employees and partners that every day contribute to the evolution of the company.

The one thousand Italian top companies were presented at the Milan Stock Exchange on Monday 23 May during the dedicated event called “L'Italia genera futuro” (“Italy generates future”) with the special participation of Vittorio Colao, the Minister for technological innovation and digital transition.